You will find that Cypriot cuisine takes its ingredients and flavors from signature Greek and Turkish fare.  A typical Cypriot dinner will start with appetizers, dips, and salads, followed by main dishes that are mostly meat-based, and end with dessert and traditional strong coffee that’s brewed right on the island.

Both sides in Cyprus are fairly self-sufficient in terms of food production and both export a variety of fruit and vegetables. The agrarian sector of the economy is gradually diminishing as the service sector assumes prominence.

Cyprus potatoes are long and waxy with a unique taste, exported internationally. Locals love them baked in the oven, preferably the outdoor beehive fourni. Many Cypriots add salt, cumin, oregano, and some finely sliced onion. When they barbecue, some Cypriots put potatoes into foil and sit them in the charcoal to make them like jacket potatoes – served with butter or as a side dish to salad and meat.

Salad vegetables are eaten at every meal, sometimes whole. More often, they are prepared chopped, sliced, and dressed with lemon and olive oil. In the summer, the usual salad is of celery leaves and stalks, parsley, coriander leaves, tomatoes, and cucumber. Summer purslane (glystridha) is very popular as are wild dandelion leaves.

In the early spring, artichokes are in season. Cypriots eat the leaves by detaching and biting off the fleshy base. A common preparation for the stalks and the heart is braised with garden peas, with a little onion and perhaps a chopped tomato. Meat is sometimes added.

Bamies (okra or ladies' fingers) are baked in the oven with tomato and oil, and kounoupidhi (cauliflower) is also given this treatment. Cauliflower is also made into moungra, a sour pickle covered with a marinade of vinegar, yeast, and mustard seeds. It is also cooked in tomato sauce, onions and mince meat.

Vazania/patlican (aubergines) can be prepared in a variety of ways, including stuffed and in moussaka. They are commonly fried and stewed slowly in oil, where the cooking time brings out the flavour and also allows them to shed the oil they have absorbed. Turkish Cypriots hollow them, fry them, stuff them with tomatoes and garlic or mince meat and tomato paste, cook them in the oven and garnish with parsley. 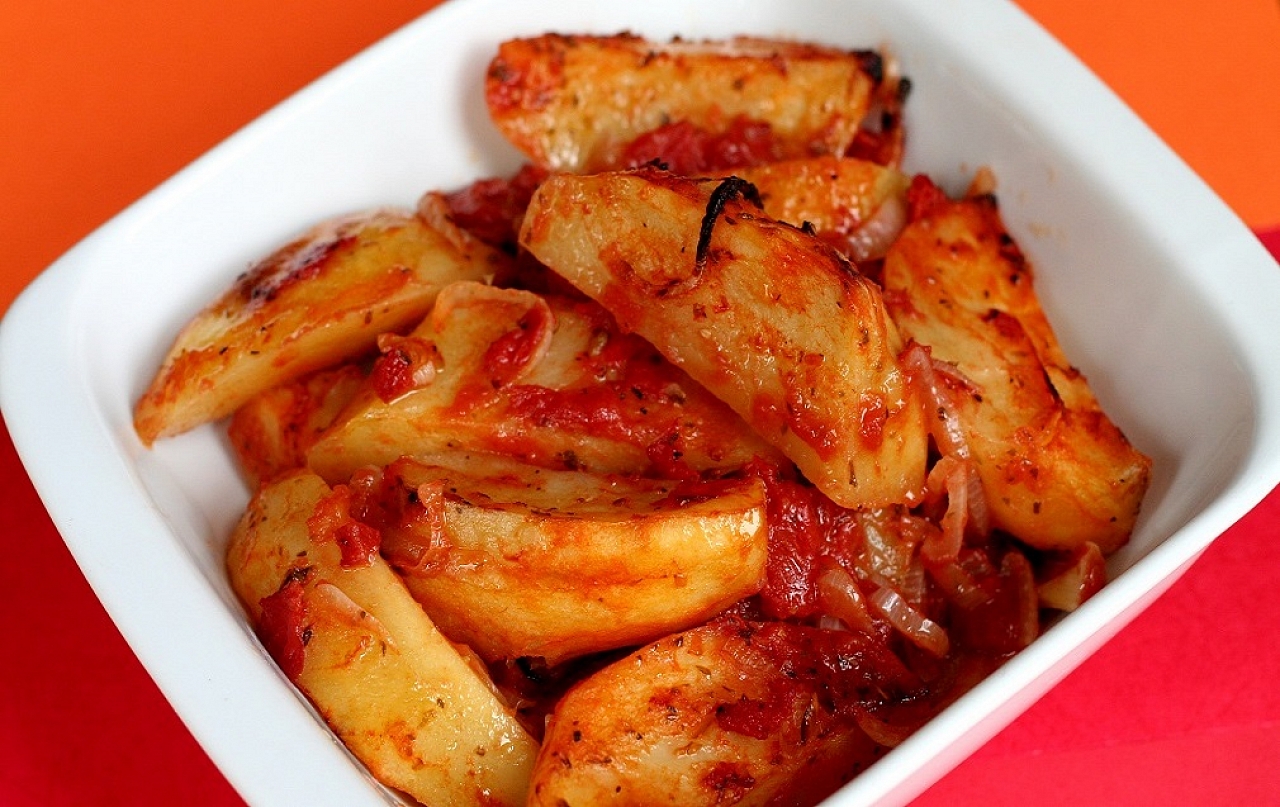 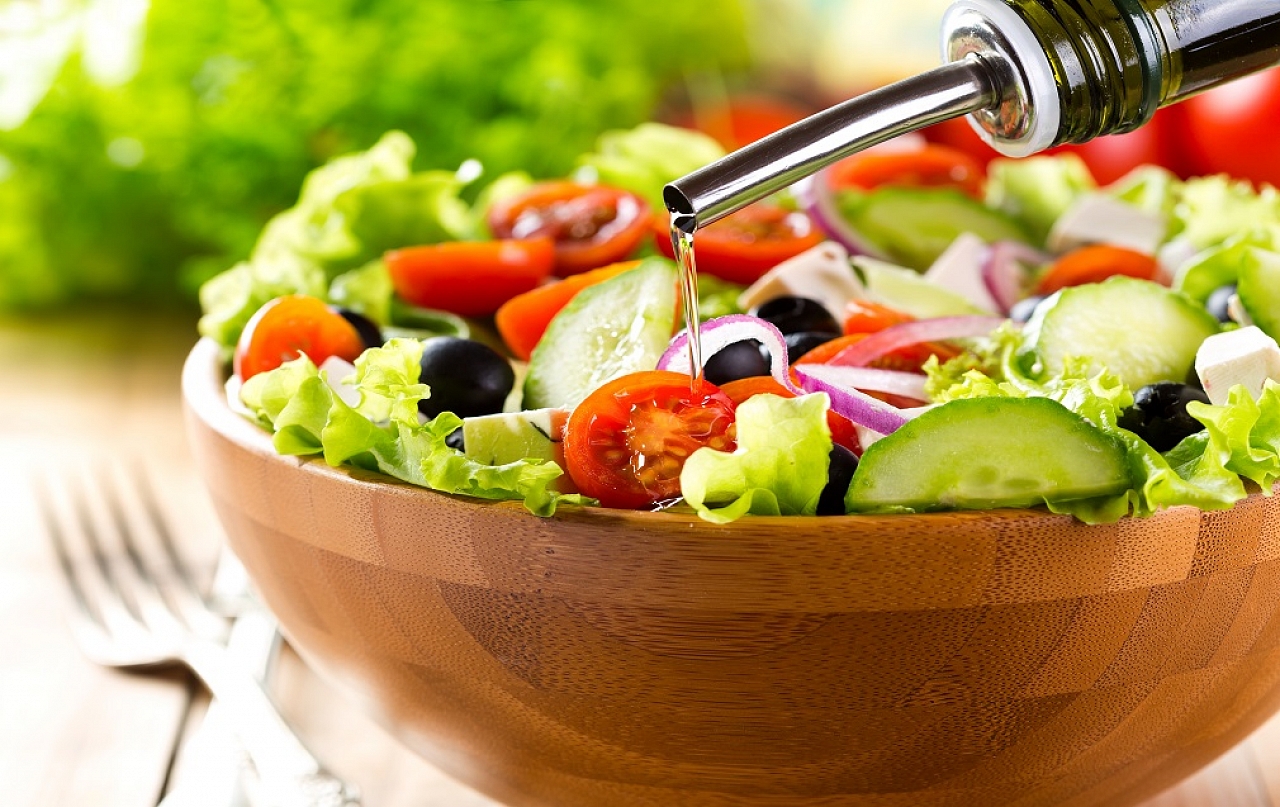 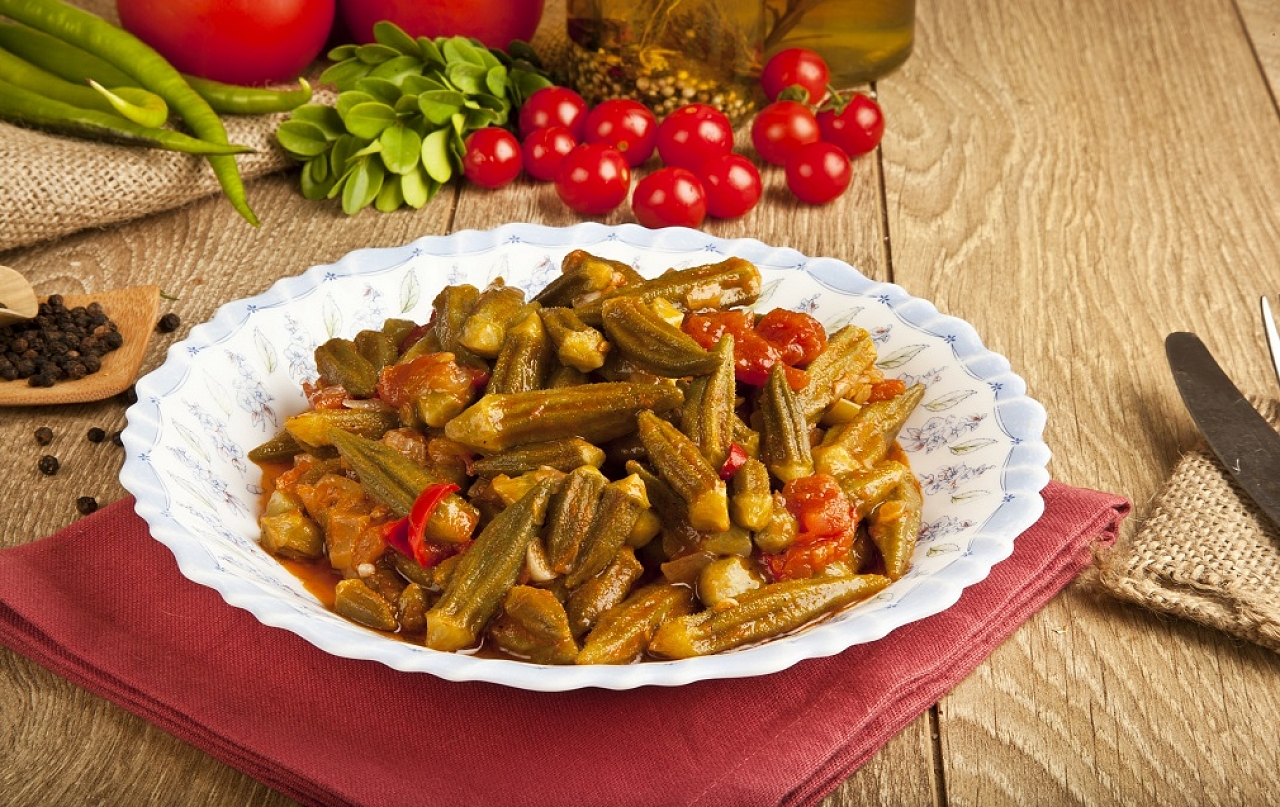 Popular seafood dishes include calamari, octopus, cuttlefish, red mullet (parpouni/barbun), sea bass (lavraki/levrek), and gilt-head bream (çipura). Octopus, due to its peculiar taste and texture, is made into a stiffado (stew) with red wine, carrots, tomatoes, and onions. Calamari is either cut into rings and fried in batter or is stuffed whole with rice, cumin, cloves, sometimes adding mint to the stuffing, and then baked or grilled. Cuttlefish (soupies) may be cooked like calamari or like octopus in red wine with onions. It is sometimes prepared with spinach, but without adding garden peas, which are a popular accompaniment for cuttlefish in Turkey (specially in west and south coast), some parts of Greece, and Italy. Calamari, octopus, and cuttlefish commonly feature in meze, a spread of small dishes served as an extensive set of entrées.

The most traditional fish is salt cod, which up until very recently was baked in the outdoor beehive ovens with potatoes and tomatoes in season. Gilt-head bream is popular because it is relatively inexpensive and like sea bass extensively farmed. Until recently, salted herrings bought whole out of wooden barrels were a staple food. They are still enjoyed, but not as much now, as fresh fish and meat are regular alternatives.

Many fish restaurants also include in the fish meze a variety of different food which include fish, for example fish souffle and fish croquettes. 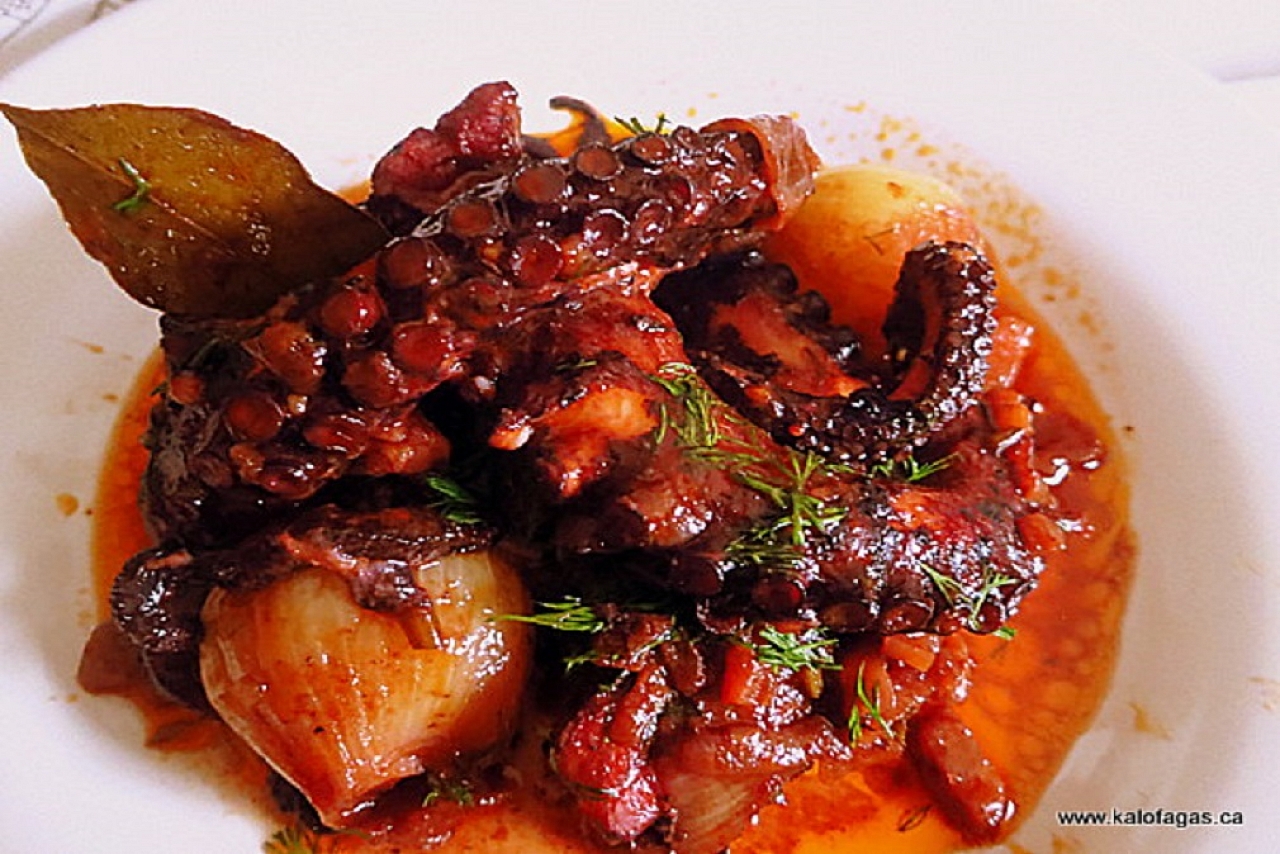 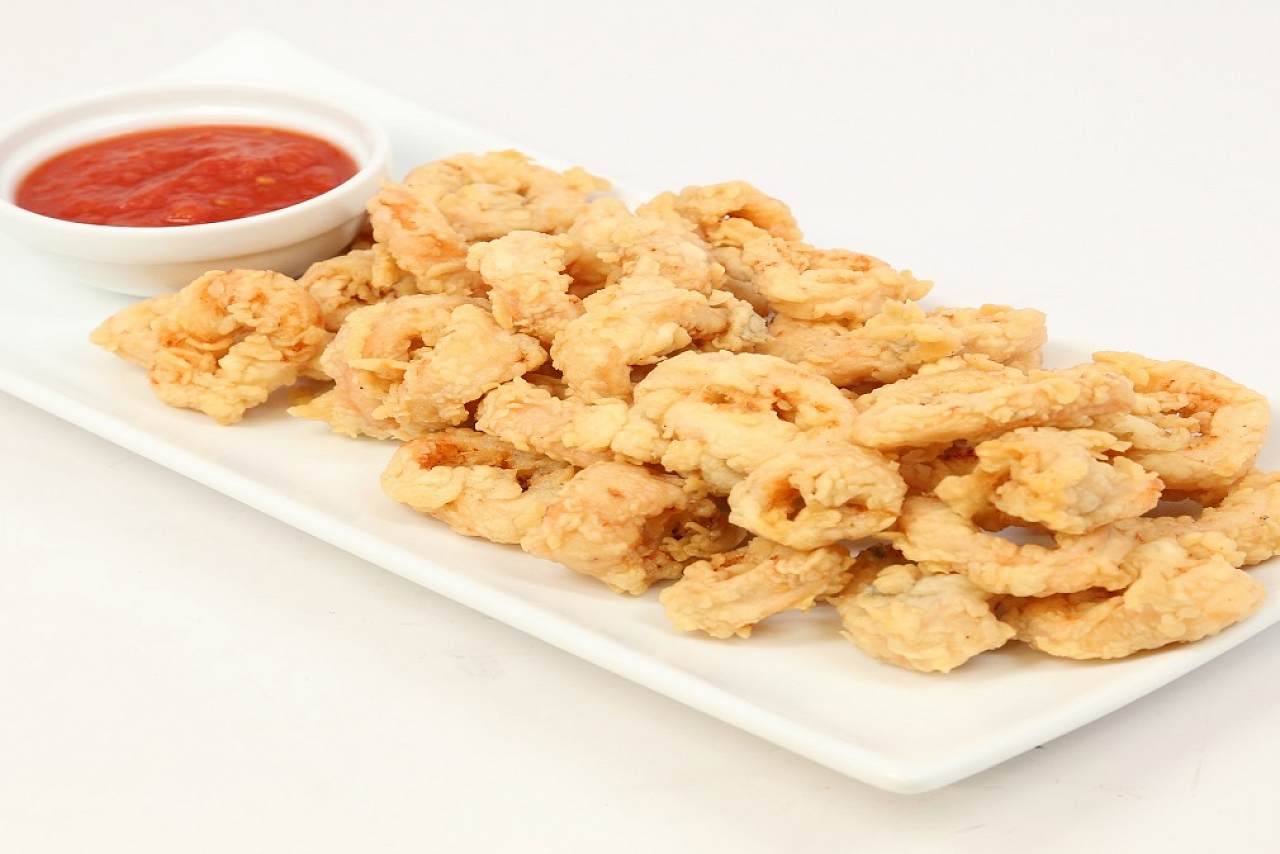 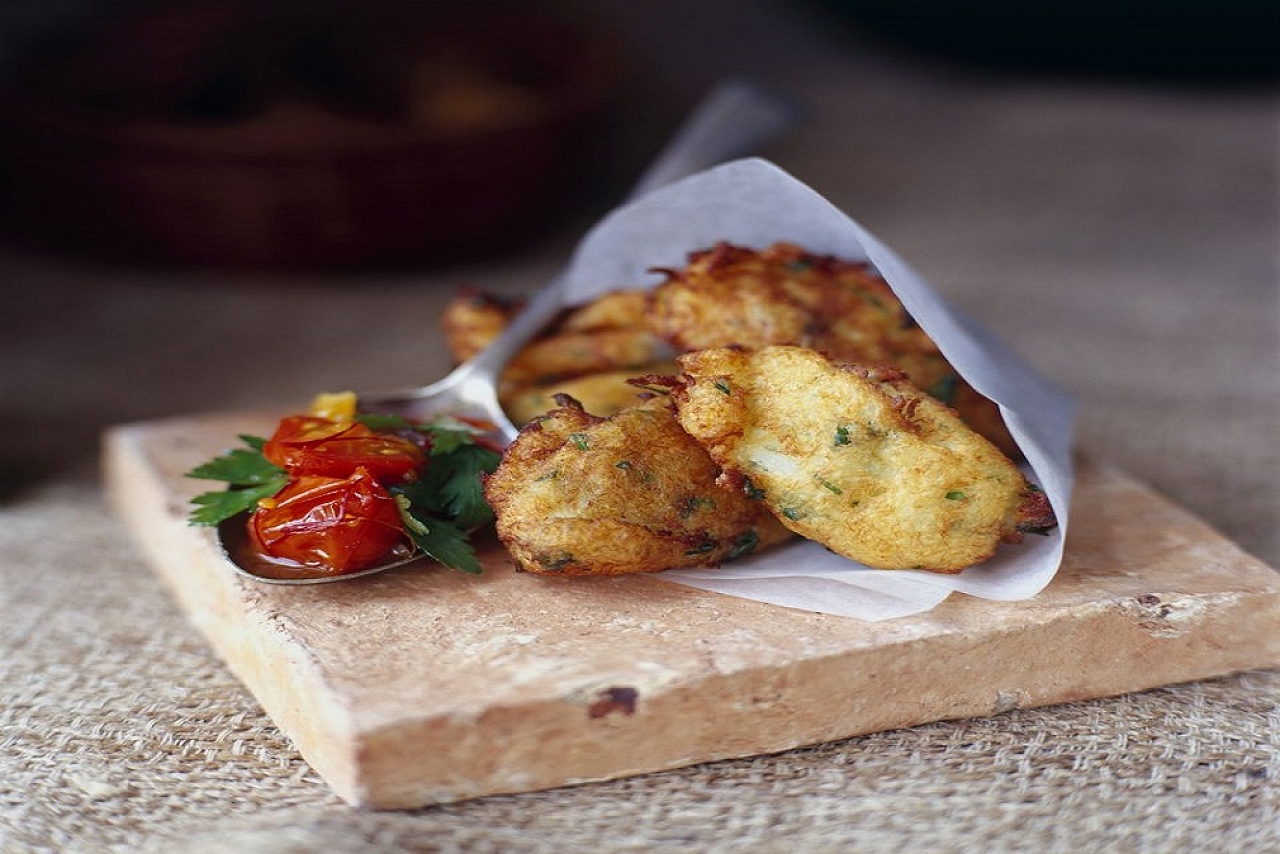 Prior to Cyprus' urbanisation, Cypriots traditionally ate fresh meat on weekends. This was usually a boiled chicken, served with a starch (usually pasta or pourgouri) cooked in its juices. This would stretch the meat to enable the whole family to eat. Other fresh meat dishes were only enjoyed occasionally, sometimes en masse as a feast such as a wedding. Now, as people are better off and meat is widely available, traditional meat dishes are enjoyed frequently.

Afelia (in the first picture), when well prepared, is a saute of pork, red wine, and coriander seeds. Psito (in the second picture) is large chunks of meat and potatoes cooked in the oven. Plenty of fat is used in its preparation; traditionally, this would have been rendered pig fat, but now sunflower oil is used. Olive oil is used as a dressing for salads, vegetables, and pulses but is not used to cook meat dishes.

Preserved pork is very popular, and before refrigeration, it was the main source of red meat available to Cypriots. Before refrigeration became widespread in the 19th century it was tradition to throw away the preserved pork in summertime. Cypriots also add red wine; therefore, there is a characteristic flavour to most of the charcuterie from the island.

Lountza is made from the pork tenderloin. After the initial brining and marinading in wine, it is smoked. Although it can be aged, many prefer younger, milder lountza. It is often cooked over coals or fried with eggs to act as a sandwich filler or as part of a meze. Stronger than lountza and made from the leg, is chiromeri, which is similar to any smoked, air-dried ham from Southern Europe, although the wine flavour makes it characteristically Cypriot. In non-mountain areas, the same meat used for chiromeri is cut into strips along the muscle compartments and dried in the sun as basta. The shoulder of a freshly slaughtered animal is cut into chunks about the size of an almond along with a smaller quantity of chopped back fat, which are marinated in wine and brined, stuffed into intestines, and smoked as sausages (loukaniko).

Souvlakia (in the last picture) is a popular Greek fast food consisting of small pieces of meat and sometimes vegetables grilled on a skewer. It is usually served with grilled bread, or in a pita wrap with garnishes and sauces, or on a dinner plate, often with fried potatoes. The meat usually used in Greece and Cyprus is pork, although chicken, beef, and lamb may also be used. In other countries (and for tourists), souvlaki may be made with meats such as lamb, beef, chicken, and sometimes fish (especially swordfish)

A traditional practice that is dying out fast is to render pig fat for use as a cooking medium and a preservative. Loukaniko and also chunks of fried salted pork meat and fat can be stored in earthenware jars submerged in the lard for a long time, even in the heat of the island.

Lamb and goat meat is also preserved as samarella, made very salty to prevent the fatty lamb meat from going rancid. Very popular amongst both communities is preserved beef. The whole silversides and briskets are salted and spiced quite powerfully to make pastourma/bastirma. The same meat and some fat is chopped finely and made into pastourma-loukaniko sausages.

Many Cypriots consider snails a delicacy. Snails are in season in late autumn, when the first good rains arrive after the hot summer. The most popular way to prepare snails is to barbecue them. Another popular variation is to cook them with onions, garlic and tomatoes. 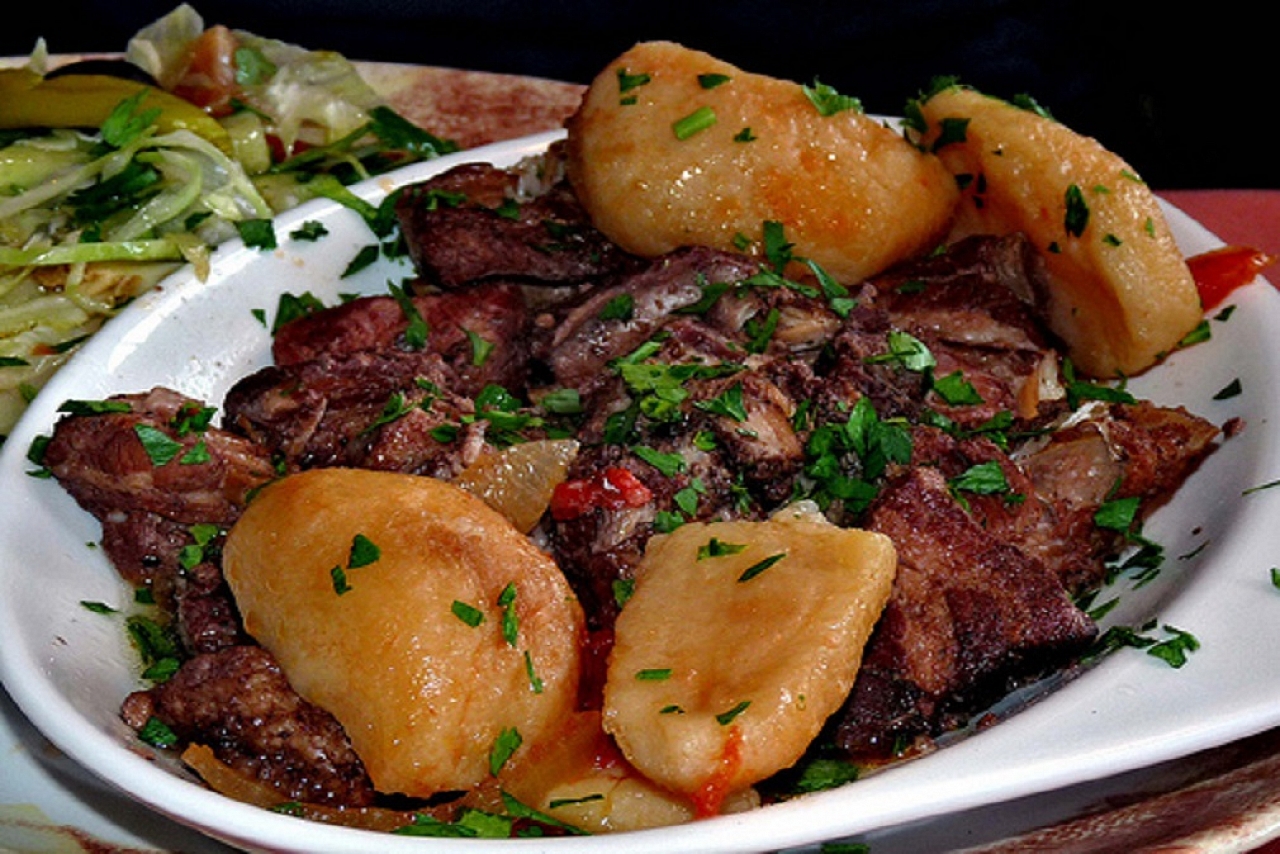 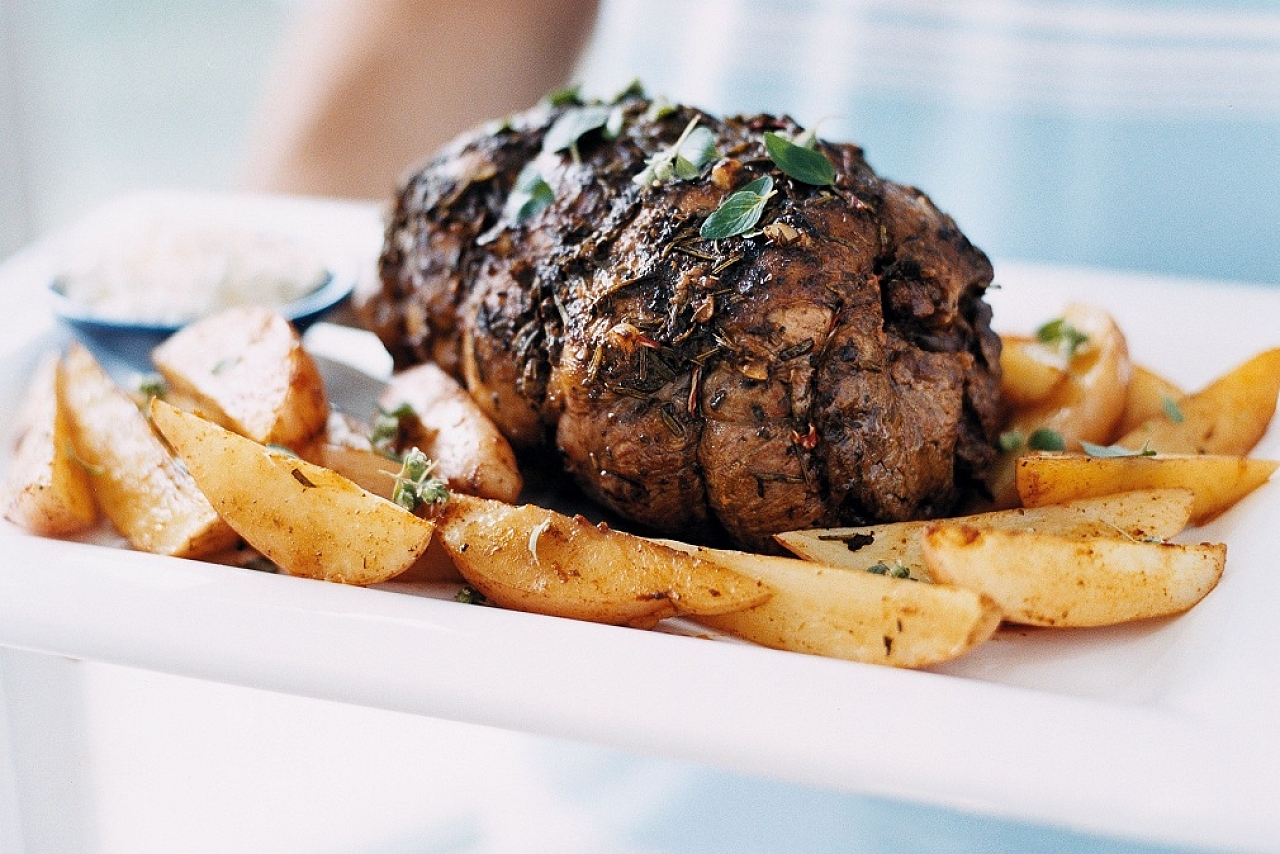 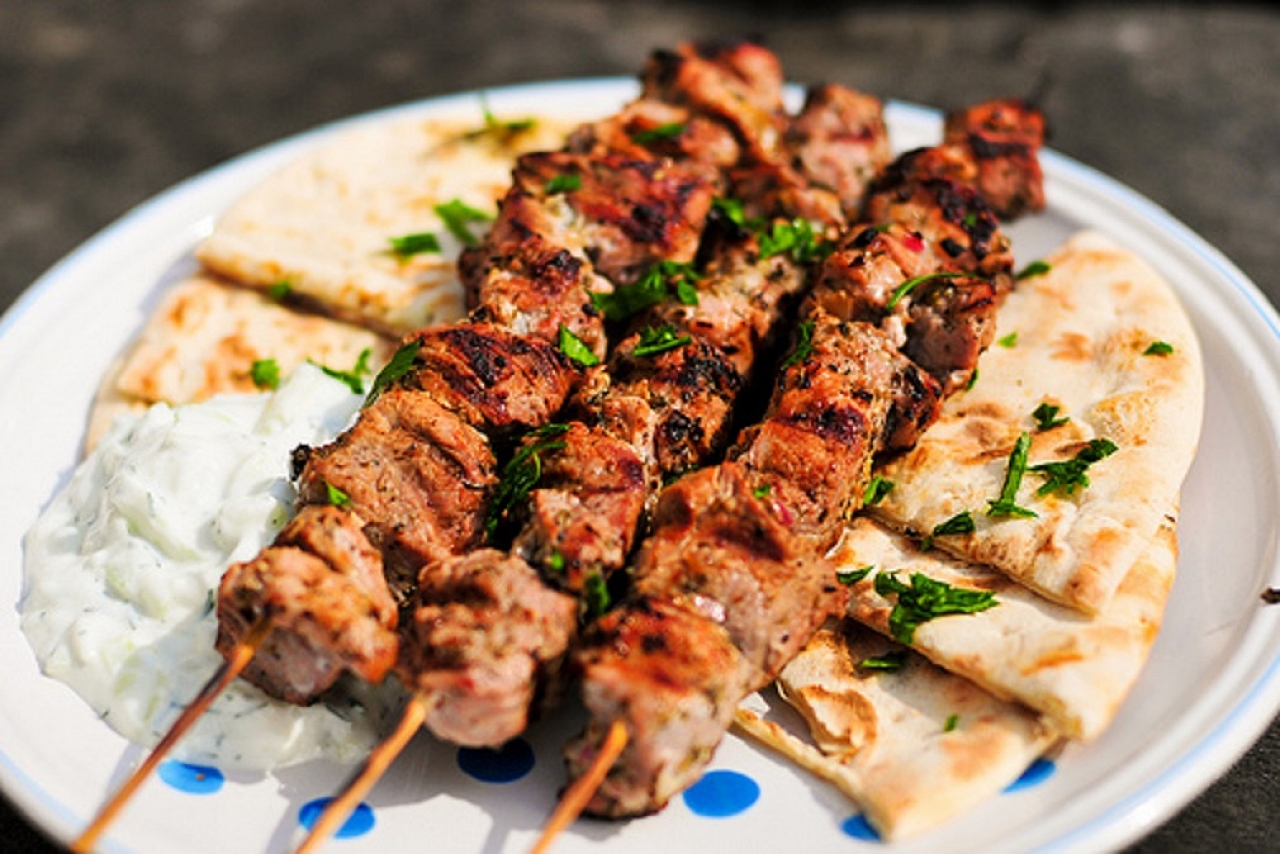 Mezedes is a large selection of dishes with small helpings of varied foods, brought to the table as a progression of tastes and textures. The meal begins with black and green olives, tahini, skordalia (potato and garlic dip), humus, taramosalata (fish roe dip), and tzatziki/çaçık (ttalattouri in Cypriot), all served with chunks of fresh bread and a bowl of mixed salad. Some of the more unusual meze dishes include octopus in red wine, snails in tomato sauce, brains with pickled capers, samarella (salted dried meat), quails, pickled quail eggs, tongue, kappari pickles (capers), and moungra (pickled cauliflower). Bunches of greens, some raw, some dressed with lemon juice and salt, are a basic feature of the meze table. The meal continues with fish, grilled halloumi cheese, lountza (smoked pork tenderloin), keftedes (minced meatballs), sheftalia (pork rissoles), and loukaniko (pork sausages). Hot grilled meats – kebabs, lamb chops, chicken – may be served toward the end. The dessert is usually fresh fruit or glyka – traditional sugar-preserved fruits and nuts 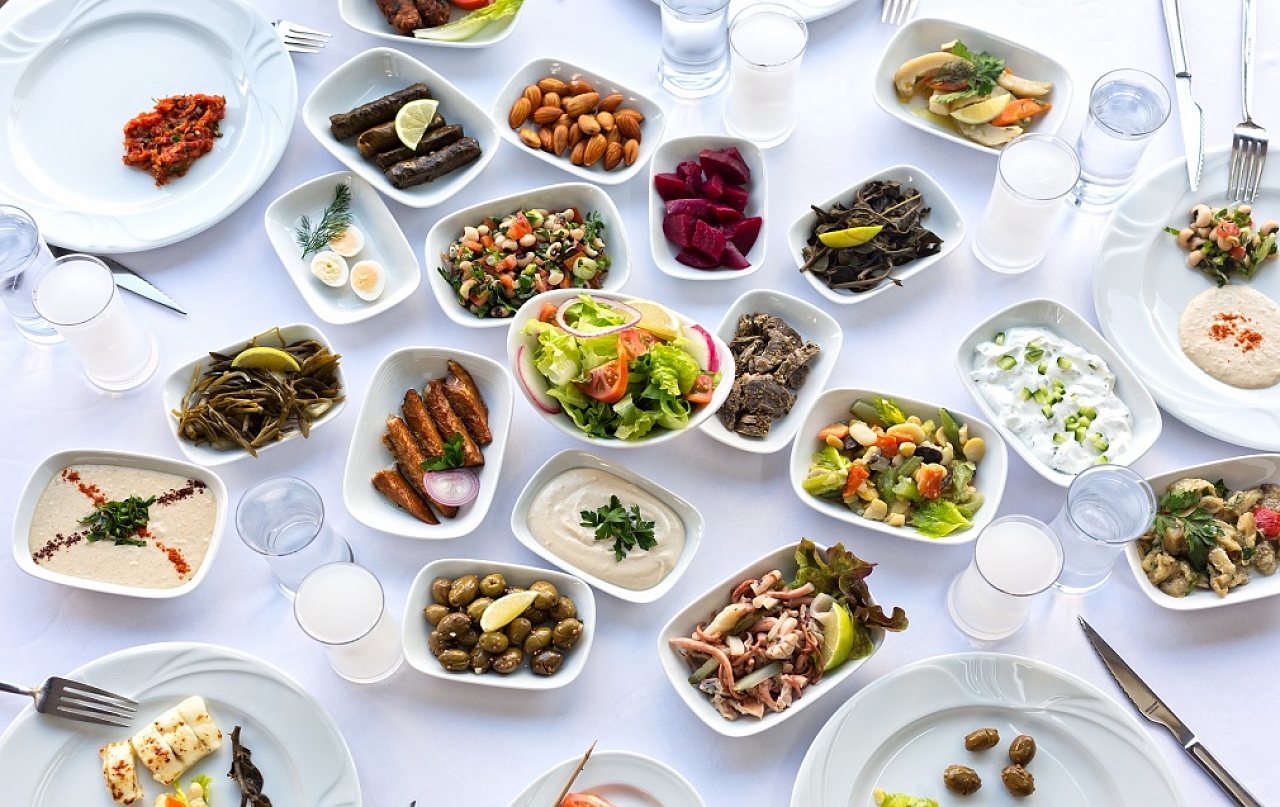 Easter is a movable celebration and it's the Greatest Holiday of the Orthodox Church. It is always celebrated on the first Sunday following the first Full Moon occurring on or after  the Spring equinox. Holy Week is dedicated to Church-going and to baking.

During the Easter the really religious cypriots are having a week of fasting. Fasting actually is recommended for 50 days but today's generation only seems to be able to handle it during Holy Week. It's called "Sarakosti" (lent)  and Christians are not supposed to eat meat, dairy products or oil.

On Holy Thursday “Flaounes” are baked. Flaounes are made of short crust with cheese, egg, raisings and mint filling. All the family will gather together from early in the morning and will help bake them. Also in the same day they usually dye eggs to symbolise Christ's Blood from the Cross.

The crucifixion of Christ is on that day so people go to church in the evening to "mourn". The Church's icons are covered with black veils to show their grief.

"Epitafios" is on Holy Friday. Everyone takes flowers to the church and they decorate the Epitafios (in the second picture) or Holy Sepulcure. The procession starts after the evening service. Young men carry the "Epitafios" outside the Church around the neighbourhood and back to the church, people follow the "Epitafios" the whole time.

On Holy Saturday morning, people go to church and as soon as it is announced by the priest that Christ is no longer in his grave, the church doors and seats are banged by the people and all the black veils that cover the Icons drop.

After the midnight service the whole family gathers together for a feast. People eat a special kind of soup called "Avgolemono". They also crack the hard-boiled, dyed, eggs and say "Christos Anesti" which means “Christ has risen from the dead,” and the response is "Alithos Anesti" which means indeed He has risen.

Holy Sunday or “Pascha”! On this day prepare to eat, eat and eat again! This day is all about family and friends gathered all together for a big feast with lots of dyed eggs, flaounes, roast  lamb and lots of wine and other alcoholic drinks. Traditional songs are included. This feast is LOUD and NOISY.

Finally, Easter Monday is all about traditional games especially on villages and small communities. 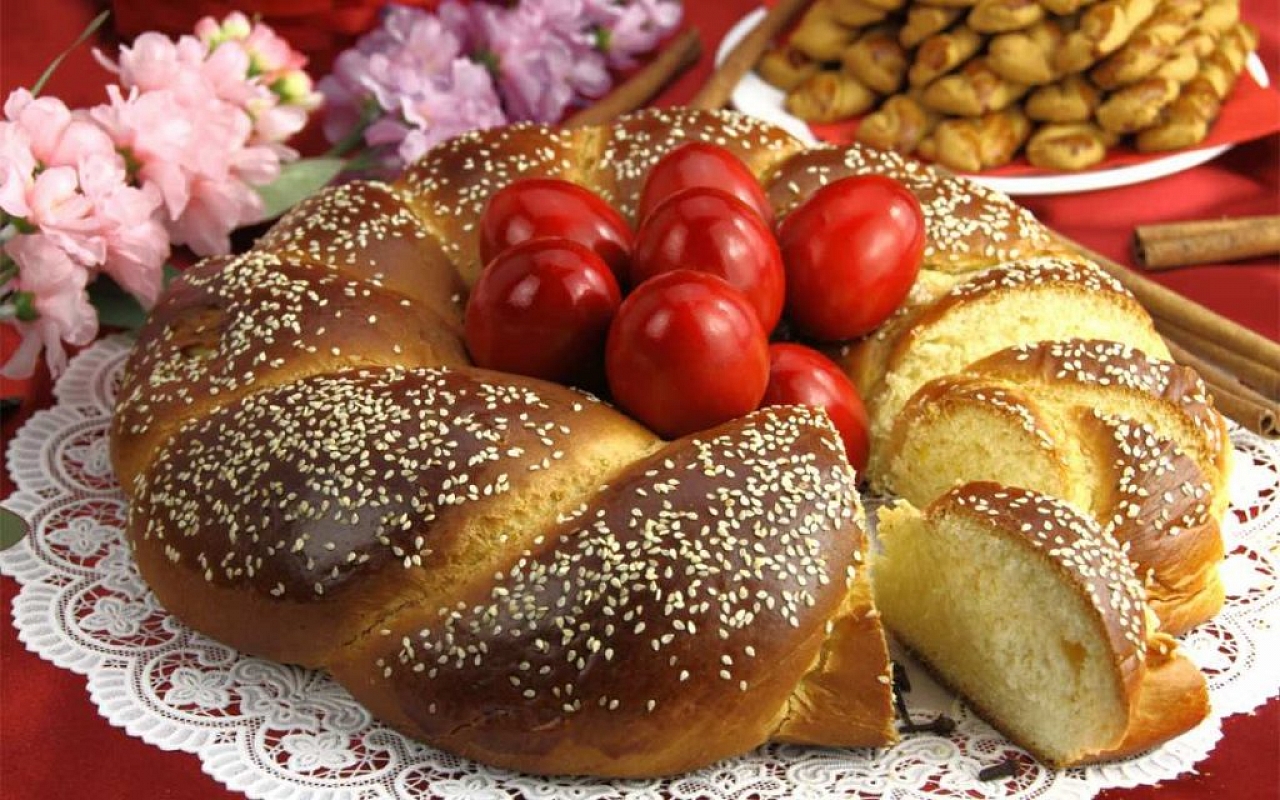 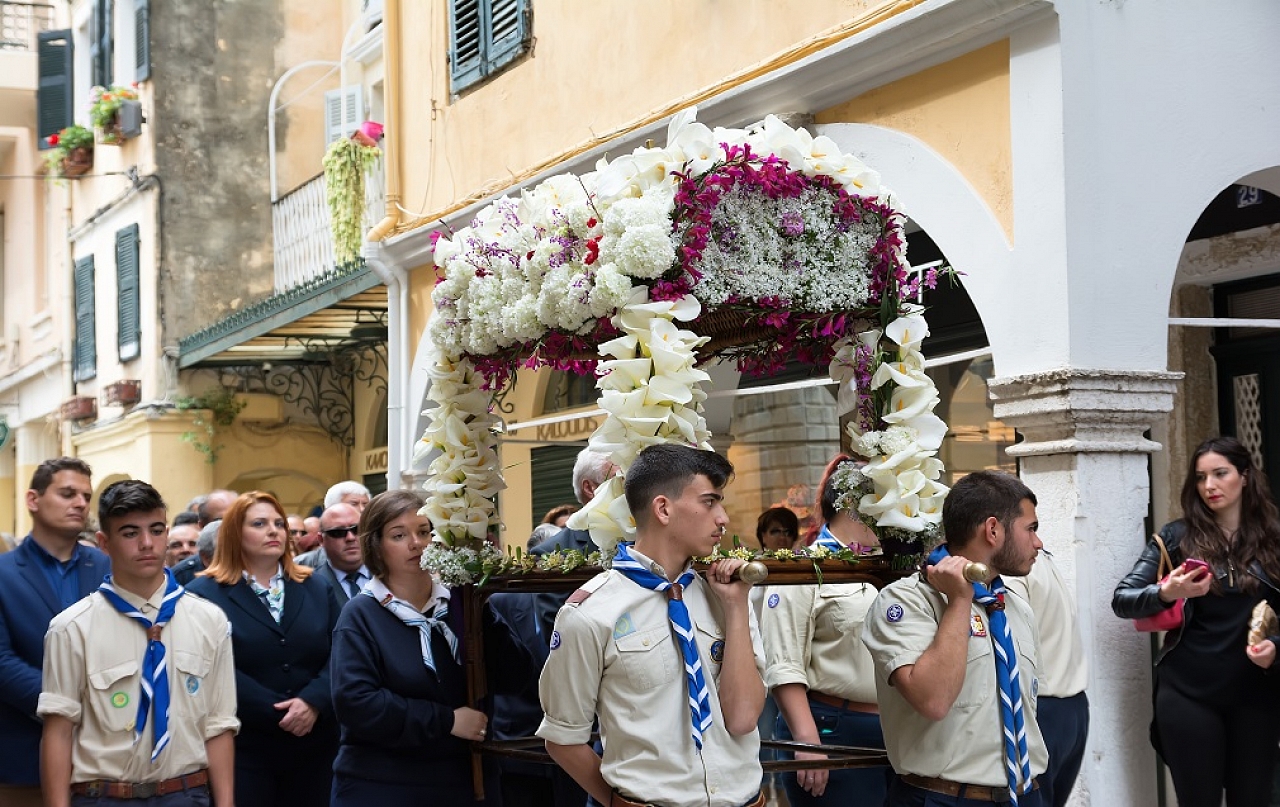 The Mediterranean diet is based on a Greek diet and very well applicable in Cyprus specifically the food that natives of Crete, Greece and Southern Italy consume. It is a diet that places an emphasis on fresh fruit, plant foods, olive oil and dairy products, and has been known to prevent strokes and heart disease among other things. The Mediterranean Diet Food Pyramid serves as a guide to show which foods to eat to stay within the diet strategy. 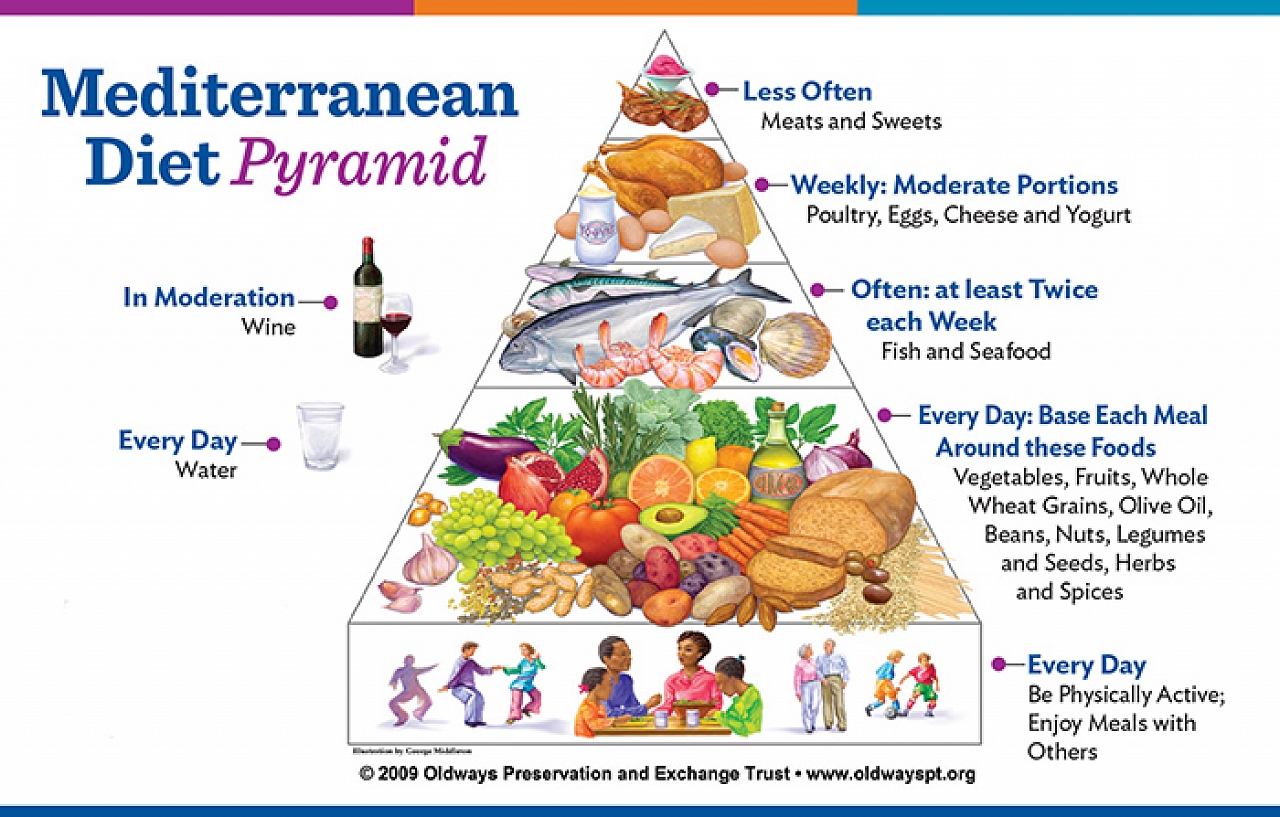 How to Use the Mediterranean Diet Food Pyramid

For centuries, Cypriots have lived on and enjoyed their version of Mediterranean diet. Today in a world of even more uniform tastes and a gradual shift to Western style food habits, the effort to retain customary loyalty to distinctive local food and wines, becomes a hard one indeed. A growing number of Cyprus’ authentic food products are due for getting official protection under European Union regulations for PDO (Protected Designation of Origin) and PGI (Protected Geographical Indication).On the one hand, a new direction away from globalization of dietary habits should be taken by consumers.

A recent edition of the Journal of American Medical Association notes the health giving praises of the Mediterranean-style diet in two separate studies, which show that following closely such a diet improves healthy longevity and prevents the development of metabolic syndrome (a condition characterized by obesity and high blood pressure).